“Glory to God in the highest, and on earth peace
among people with whom he is pleased.”
– Luke 2:14 [NET]

Until a few days ago, I’ve always read this verse in a Calvinistic way (I’ll use the term “exclusivist” for the rest of this post). That is to say, the peace being announced here is for a select group of individuals (not all of humanity) who have pleased God. Indeed, this is is how the ESV, NIV, and NRSV all steer their readers, replacing the above noun “people” with the pronoun “those” for a phrase that reads similar to “peace among those with whom his favor rests/he is pleased.”

However, I recently heard a sermon where the preacher read the text in a very inclusive way. That is to say, he read the peace being announced here as for all people, who as a collective, have God’s pleasure. The NET (quoted above) and NASB both leave this reading as an option, depending on how you mentally organize the clause. Does the phrase “with whom he is pleased” describe the type of people who are recipients of this peace or is it more of a simple description of the broad category of “people/humanity”? Thus reading: “Peace on earth among people/humanity, with whom he is pleased.”

It’s easy to see the various theological leanings which would play into how one chooses to read this verse. Surely God is not pleased with everybody, right? Or could it simply be God’s pleasure to send the Incarnate Son to redeem his perfectly loved, if not damaged, Image Bearers? Indeed, just before this angelic announcement there is another very inclusive phrase from the lips of the divine messenger: “I bring you good news of great joy that will be for all the people (παντὶ τῷ λαῷ).” [Lk. 2:10]

I know there are some issues with the Greek (and variant manuscripts) of this verse (see below*), but . . .

What do you think?
Should Luke 2:14 be read in an exclusive or inclusive way?
Why or why not?

A quick consult with some of my more proficient Greek friends offered no help as to why exactly different translators have made the decisions they did or as to whether the Greek gives a definitive nod toward an exclusive or inclusive reading. 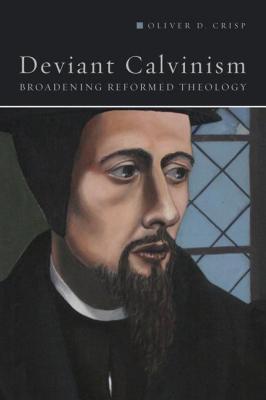 Oliver Crisp’s latest book, Deviant Calvinism: Broadening Reformed Theology, is an attempt to demonstrate that the Reformed tradition is much broader and wider than it is commonly characterized. His book succeeds in accomplishing this task. Indeed, I was eager to read this book because of my own theological history. I was once part of the young, restless, and Reformed crowd. Gradually, I grew out of my hyper-calvinism and into a gray area that was difficult for me to define. I thought perhaps I could (or should) no longer claim the title of “Reformed” … but I often found much of my theological inspiration from Reformed thinkers such as Barth. Crisp confirms my suspicions: Reformed theology is much broader than the neo-puritan calvinism that most people think of when they hear the title.

Reader be warned: this book is not for the faint of heart. It is a work of analytical theology and thus reads very philosophically. For one not familiar with reformed theological jargon or interested in “variant” strands of this tradition, it might be a difficult or tedious book to read. Crisp explores concepts such as eternal justification, libertarian calvinism, Augustinian universalism, and Barthian universalism. His focus is not so much on the Scriptural warrant (or lack thereof) for certain doctrinal claims as it is on the logic which lies behind them – noting what truth claims a doctrine necessarily requires or denies. Much of the book revolves around a discussion of various ways one in the Reformed tradition might hold to the belief in universalism. Thus, it was a helpful addition to my current interest in the presence of universalism in evangelicalism.

I recommend this book as a thought-provoking read to all those who are invested in the Reformed tradition.

Note: I received this book from Fortress Press in exchange for an unbiased review.

“Do you believe in predestination or free-will?”

I’m not a famous Christian leader by any means, but I do get asked this question at least two or three times a week. Most often it’s from the mouth of a young person, newly familiar with their “label,” who wants a quick soundbite to confirm my orthodoxy. They’re rarely satisfied with my answer: “It’s not that simple.”

I’ve been in Christian leadership for about seven years now and over the course of that time I have changed my mind repeatedly about how to interpret biblical passages describing God’s action of election, or predestination. Thus, I am fairly humble in my approach to the doctrinal debate. I am confident, however, that my ability to parse the issue has grown as I’ve been exposed to more and more of the church’s best theologians.

These days, I generally give three “theological guidelines” as a general rule of thumb for how I approach the biblical notion of election/predestination:

“Jesus Christ is the basis of the doctrine of election. All its statements must be statements about Him.” – Robert Jenson

The heart of God’s eternal choice consisted in choosing to be radically for us in the person and work of his Son and through His Spirit. Christians are chosen “in him” (Eph. 1:4) and are predestined to be adopted as sons “through Jesus Christ” (Eph 1:5). Before election/predestination has anything to do with specific human beings, it concerns God’s choice to love, pursue, and redeem his creatures through his love for his Son. God’s “choice” is not a mystery – but is revealed through the person and work of Christ. If you want to know God’s eternal decision about you, it is that he has chosen to relentlessly pursue your rescue no matter what it may cost him. Martin Luther says it beautifully: “When wondering where and how to find the Creator God of predestination and majestic holiness, remember there is no other God besides this man, Christ Jesus. See God revealed, hanging on a Roman cross, for your sins.”

We often approach the Scriptures with an inherited worldview of hyper-individualism. However, election (in both the Old and New Testaments) is a corporate concept. God elected Israel to be his “chosen” people. But there were ways that individuals could get into the chosen community and ways that they could get out of it. Similarly, Paul uses inclusive pronouns to refer to election – “us” – and never tries to distinguish between individuals in a local church. He assures the baptized, believing, Spirit-filled community that they are the chosen ones. A corporate understanding of election doesn’t deny that humans have legitimate free will. The crisis that election creates is not contemplation over whether God chose you behind some secret curtain before history, but over whether you have joined the chosen community. God has not chosen between Sally vs. John – he has chosen to redeem all those who are in Christ. He desires that both Sally and John are united to Christ, though they have legitimate freedom to reject the offer. Even when I was a hyper-calvinist, I agreed that “no one who believes and follows Christ will come to find that they have not been chosen.” Thus, the world God has created is not one in which Sally or John might join the believing community only to have an angelic bouncer tell them that unfortunately they weren’t “on the list.”

When the Scriptures speak of predestination, it is almost always in the context of overflowing praise. That is to say, the doctrine of election is intended to be unequivocally good news. The moment that it becomes bad news, or cause for worry and sleeplessness, it has been horrendously misunderstood. Israel is constantly reminded that they were not “chosen” because God loved them more than the other nations or because they were his favorite – their election was actually good news even for the nations around them (“I’ll bless you to be a blessing.”)  This doctrine is not meant to be a mystery that causes fear in the hearts of Christians, but a truth that is recognized by believers that causes unexplainable joy. Likewise, it is not meant to create an “us” versus “them” mentality or to divide the world neatly into two groups: the people God loves and the people God hates. Hans Urs von Balthasar summarizes this point nicely: “How can a person seriously believe that God is love and has given himself up for us on the cross, because he has loved and chosen us from all eternity and has predestined us for an eternity of bliss in his presence- how can anyone seriously believe this ‘to be true’ and at the same time refuse to love God in return or despair of God’s love?”

“How can a person seriously believe that God is love and has given himself up for us on the cross, because he has loved us and chosen us from all eternity and has predestined us for an eternity of bliss in his presence – how can anyone seriously believe this ‘to be true’ and at the same time refuse to love God in return or despair of God’s love?”
– Hans Urs von Balthasar

“When wondering where and how to find the Creator God of predestination and majestic holiness, remember there is no other God besides this man, Christ Jesus. See God revealed, hanging on a Roman cross, for your sins.”
– Martin Luther

Recent downtime in the Atlanta airport (Can you say, “Johnny Football”?) found me running my anxiety of flying through differing theological models of divine providence. Disappointingly, all three of the major models came up short when confronted with my neuroses.  😉

Arminianism:
“God foreknows whether this plane will crash or not.  If it ends up crashing, God decided not to intervene.  This doesn’t make me feel much better… God knew about it and didn’t do anything!”

Open Theism:
“God doesn’t know whether the plane will crash or not and might not be able to intervene if it starts to.  Well, I guess I can’t blame God… but we’re still going to crash in a fiery ball of steel.” 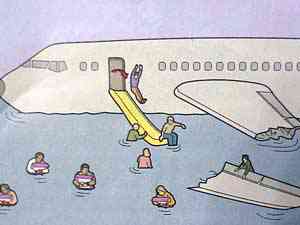