The time is here: marijuana is being legally sold for recreational use.

As someone interested in both how the church does ethics and what conclusions she reaches, this is about to be an interesting time.  Anyone paying attention to this issue has probably seen the writing on the wall for a while and it appears that it might not be too long until the entire country can smoke legally (although I realize that this is not a foregone conclusion).

This creates an interesting and complex situation for evangelical church leaders, though, who for so long have demonized marijuana use.  The situation is even more intriguing due to the following fact: (it seems to me, at least) the leading argument from Christian parents and youth leaders up to now was simply, “It’s illegal. And Christians have to obey the law.”  Not a wholly satisfying answer to a generation of smokers, but logical.

I’d like to pose two questions in hopes of a significant discussion taking place between readers and authors of Cataclysmic:

[1] Prediction: How do you think church leaders will react?
Not how should they react, but how do you predict that they will react?  Will there be a turn-about?  Will marijuana eventually be treated by evangelicals in a way similar to popular views on alcohol? [See: Is Marijuana Sinful for Christians?]  Or will evangelicals bunker down against marijuana use by utilizing arguments besides that of legality (a resurgence in the “gateway drug” argument, perhaps)?  [See: Driscoll’s Puff or Pass: Should Christians Smoke Pot or Not?]  How polarizing will the issue be? (Will folks get fired for coming out in support of legal marijuana use?)  Even if church leaders denounce the morality of marijuana, will the average congregant pay any attention?

[2] Ethical Analysis: Do you think it is sinful for Christians to legally use marijuana?  Why or why not?
What are the important arguments (Biblical/theological, historical, philosophical, scientific/medical, etc) for and against?  What is at stake?  How should Christian leaders go about sharing their opinions on the issue (if at all)?

I’d love for you to join the discussion and share your answers! 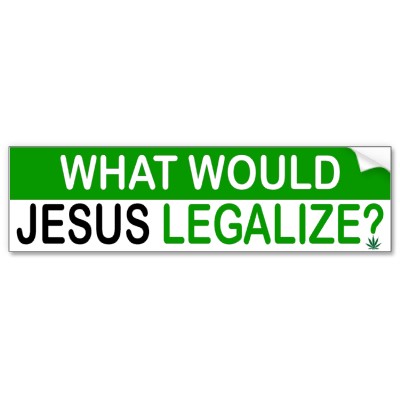 6 thoughts on “Marijuana and Jesus: Love it or Hate it?”